Soon after Pampered Menial had been released in 1974 — I had heard several songs on FM radio and absolutely loved it — I was home ill from school and was laying on the couch watching TV when my mother came to tell me she was going out to run some errands and asked if I needed anything. Jokingly, I said "I need the new album by Pavlov's Dog, Pampered Menial." To my utter shock when my mother returned home she had bought me the album!!!! That was one of the coolest thing my mother ever did!!!

The following year on 3 May 1975 Kraftwerk came to Tulsa and Pavlov's Dog was the warm up band. I was doing video at school — back in the day when it was black and white reel-to-reel video — and arranged to do a video interview with David Surkamp before the show. David and the entire band were absolute sweethearts to me and even though I was only a junior in high school they gave me the respect of a professional journalist. They were also kind enough to all autograph my Pampered Menial album cover. (Kraftwerk signed my Autobahn cover, too!) 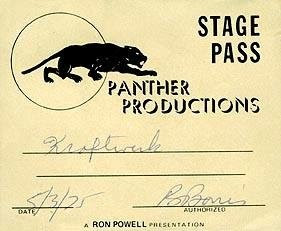 When I made arrangements to do the interview I was informed I would not be allowed to shoot any footage of either band performing, but sitting in the front row, I snuck and shot some video anyway. Sadly, that video is long lost.